November 3-5, 2017
We had a small group of Aggies meet up with the Government Canyon Karst
Project to help with the monthly Texas Speleological Association (TSA) service project.
We were split into two teams, one ridge-walking team and one dig team. The ridge
walking team was spread out, systematically walking through the brush looking for
caves and signs of karst features which could be further explored. Ridge-walking is
really tough work, and involves bush-whacking your way through some of the thickest
brush you can imagine. The TSA has been working on ridge walking thousands of
acres of government canyon land since 1994, and although nothing major was found
while ridge-walking this trip, it helped advance the search to new sections.

The dig team was working on visiting points of interest that had been previously
documented while ridge-walking to try and open up an entrance to a cave formation.
The first location was a water sink, where water had washed away the soil leaving
primarily rocks, leading the team to believe that rain water was draining into a potential
cave feature below. After hours of slinging rocks and dirt, we had dug ourselves a nice
hole, but figured digging our own entire cave wasn’t really an option. At one point in
the dig, we had run into some large rock slabs which prevented us from following the
direction of water flow any farther. We got to learn a little about rock-shaving, which is
a technique that is often used in opening up cave entrances by using small, controlled
charges to fracture large rocks which would be otherwise immovable. This technique
worked great, but unfortunately this sink led to a dead end. We left the graveyard of
scattered boulders, and moved on to the next site. 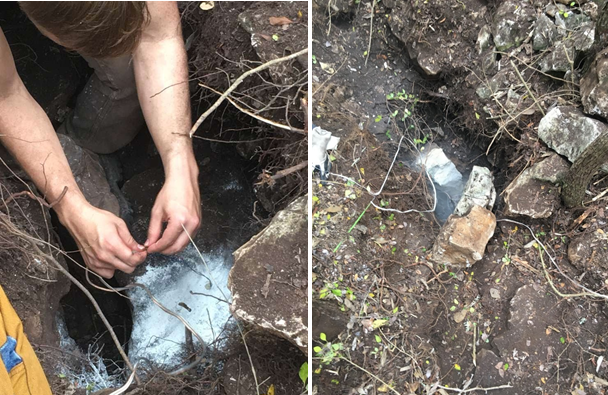 This next site was instantly more promising, and had a gap that was just large
enough to toss a small rock down. It didn’t fall more than a foot or two, but it was
more promising than the tiny cracks we had been trying to follow on the first dig.
Before we got to work hauling away rocks, we took the advice of the veteran caver
Steve who warned that this spot “looks like a very snakey hole”. After poking around
and not hearing any sounds of life inside, we determined it was time to get to work.
Before long we had hauled, chiseled, and hammered off enough rock to see that it
went pretty deep down and we might be onto something good. We had widened the
entrance quite a bit, and there would be plenty of room for your average caver, if it
weren’t for a thick root running diagonally across the entrance down into the
hole. There wasn’t any way 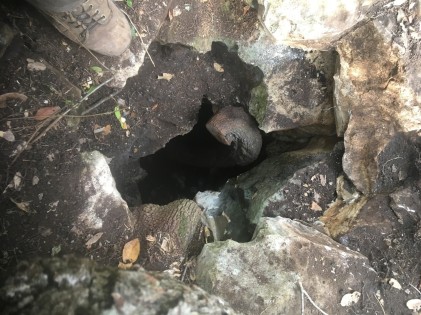 to possibly sneak around it,
so we ran back to the truck
and grabbed the tiny keyhole
saw. It was definitely the
wrong tool for the job,
especially considering the
size of the root. A chainsaw would’ve been a godsend. After multiple shift changes on sawing, we were able to remove the segment of root blocking our way.

We finally had our entrance, so I strapped on my helmet and lowered myself into
the hole. We had been able to shine a light down earlier, and could see there was a
bend in the tunnel that extended out of sight so we were pretty sure this would meet
the criteria to be considered a cave. As I crawled in, there were still some sharp edges
jutting out, and the remaining segment of root still made it difficult to move around
(eventually we sawed off this part as well). I struggled to contour my body down the
tunnel, and decided to pop my head back up to chat with everyone on the surface. As
I lifted my head I found myself face to face with a set of two beady eyes staring back at
me. I was on eye level with a snake coiled up between two slabs of rock. Two hours
of sitting in that hole, smashing rocks and cutting roots, and this little guy wasn’t
bothered at all. But holy shit did I get out of that squeeze at the entrance fast. I
wished he would’ve been a bit bigger once we coaxed him out of hiding with a stick. It
would’ve been easier to justify my freak-out if he wasn’t just a little 2-foot-long, nonvenomous rat snake. I’m just glad my caving jeans had been permanently stained a nice brown color prior to this trip, so I had nothing to worry about. 😉 I’m not sure we could’ve done anything more than we did to check for snakes ahead of time, but next time a veteran caver tells you a cave looks “snakey”, let someone else be the first one to go in. 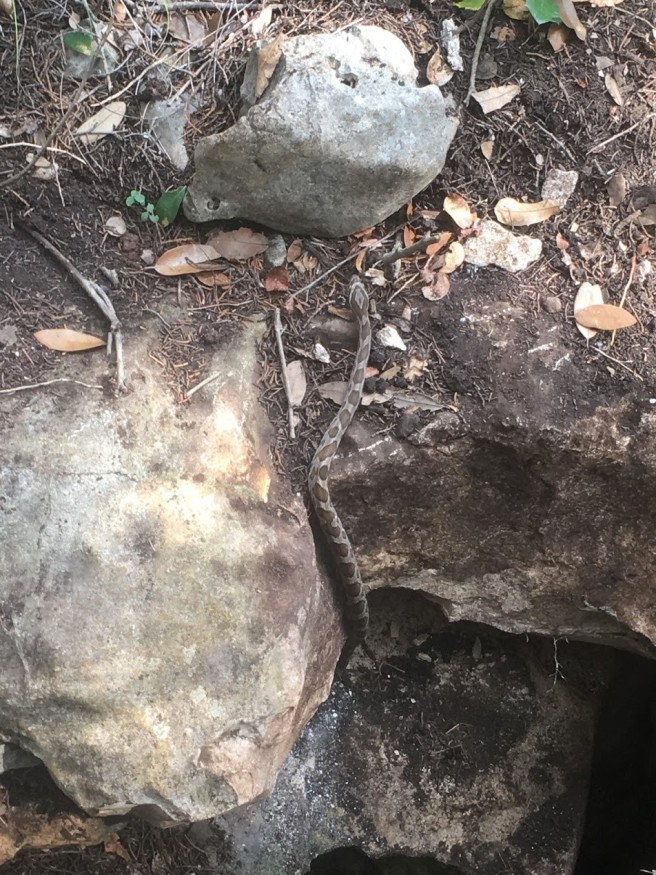 A bit spooked, I decided to let someone else go face to face with the next
creature that might be hanging out in there. With adrenaline pumping from the thought
of being the first human to ever explore somewhere, Clay hopped in and got to it. He
wedged himself down the cave tunnel and was out of sight in no time. After exploring
for a while, he popped back up and asked for the hammer we had been using to open
up the cave entrance. One strike of the hammer, and the boulder that had been
wedged at the top of a short chimney went plummeting to the ground below. From the
surface, we could only hope that the crashing sound we heard was a rock and not one
of our own, and soon we heard a call back that everything was ok. This last drop
through a narrow chimney led to the bottom of the cave, where only about two people
could stand at once. We checked the air quality with a lighter, and found it had bad air
at the bottom. There was an unmistakable 3-inch gap between the lighter and the
flame, so we didn’t hang out for long. There wasn’t much opportunity for further
exploration. This cave was a pretty straight shot from top to bottom, and didn’t have
any other potential routes to follow. All of the team, including the ridge-walking team
(who had joined us before successfully making it into the cave), had the opportunity to
go in and make it to the bottom of cave. 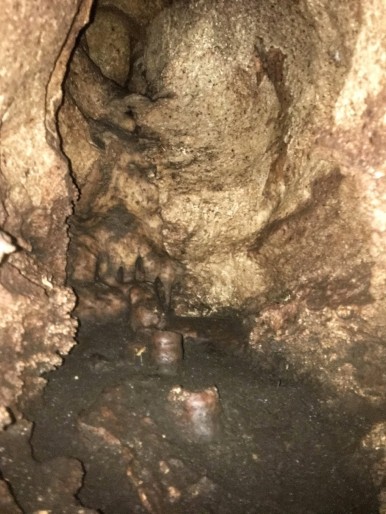 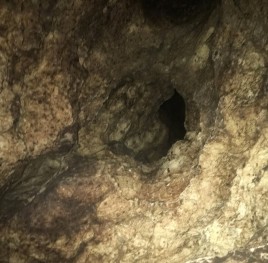 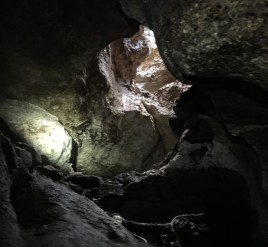 Finding a new cave was an awesome experience. Having discovered the 62nd
cave in Government Canyon is something that none of us will ever forget. A laser
range finder was used to get estimates of the cave size, and it was determined to be
about 25 feet deep. The project coordinator documented the finding, and gave our
group of Aggies the naming rights. Being members of the Aggie Speleological Society
(A.S.S.), we wanted to name it the A.S.S. Hole, but were told that might not go over
well on the formal documentation. Still, wanting to represent our Aggie roots, we
slightly varied the name to the Ag Hole instead. We headed back to camp a pretty happy group, knowing that luck had definitely played in our favor that day. We’ve all seen some pretty cool caves, but being the first group to explore one is not an experience many get to have. We met some awesome members of the caving community and hope to return soon. 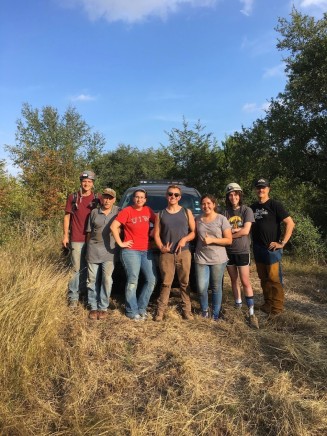 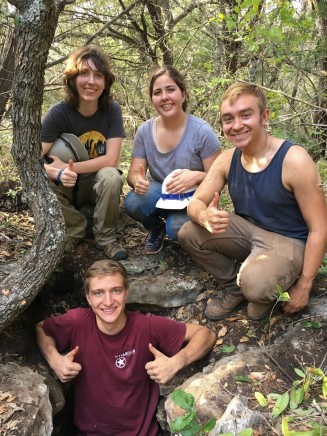 Also, due to the lack of posted trip reports, I’m not sure what a trip report is actually
supposed to look like.